The United States is an economic, technological and military powerhouse bordering just two countries, Mexico and Canada. The US comprises of 50 states, with Washington,  D.C. (District of Columbia) as its capital. The country has a wide variety of natural minerals, including the largest reserves of coal in the world. Its agricultural land amounts to almost 45 percent of total land mass and forests comprising 33 percent. Various natural disasters have been known to affect different areas of the country.

The United States has an estimated population of over 326 million people with a breakdown as follows: 72.4% white, 12.6% black, 4.8% Asian and the rest classified as ‘other’ or various ethnic groups including native Americans. As of 2018, urban areas contained 82.3 percent of the country’s total population. The U.S. has a constitutional federal republic type of government. It has the largest economy in the world, with a GDP growth of 1.5 percent and a GDP per capita of $57,500 at most recent tally. 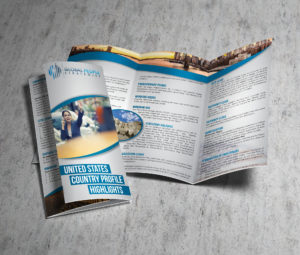