The nation of Turkey is located at the crossroads between Europe and Western Asia. It is bordered by several nations, including Greece and Bulgaria. Turkey boasts a rich history as demonstrated by the diverse civilizations that have inhabited the region, including the Assyrians and the Greeks in ancient times, eventually leading to the Ottoman Empire led by Suleiman the Magnificent which lasted centuries and encompassed much of southeastern Europe, Western Asia and North Africa. The country eventually abolished the monarchy as part of the Turkish War of Independence in 1922, which led to Mustafa Kemal Atatürk as the nation’s first president.

Tourism comprises a significant part of Turkey’s economy and with two of the Seven Wonders of the Ancient World (Temple of Artemis and Mausoleum at Halicarnassus), the country attracts millions of visitors a year. Its capital is located at Ankara, although Istanbul is its largest city. About 80 percent of the country’s citizens identify as Turkish and are Muslims, with Kurds forming the next largest ethnic group. An estimated 2.5% of Turkey’s population are international migrants and the nation is currently host to the largest number of refugees in the world (mostly from Syria). 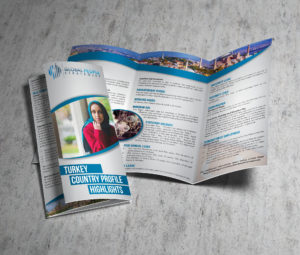