Tunisia is a north African country on the Mediterranean Sea. Mountainous in the North, Tunisia has hot, dry, semi-arid areas in the south, extending to the Sahara Desert. Berbers inhabited the area in ancient times, followed by the Romans, Muslims and specifically, the Ottoman Empire. French colonization in the late 19th century led, eventually, to its independence in 1957, followed most recently by a revolution in 2011 which led to parliamentary elections and eventual vote for President in 2014.

The major ethnic groups in Tunisia are the Arabs, Europeans and Jews. Their official language is Arabic but two-thirds of the population also speak French. Tunisia’s economy, although struggling with the corruption endemic to many countries in the region, ranked as the least corrupt in North Africa according to Transparency International. The diversity ranges from agriculture, mining, and petroleum to manufacturing and tourism. Tunisia is famous for its beaches, good weather and ‘affordable luxuries’ (New York Times) which attract millions of visitors a year. 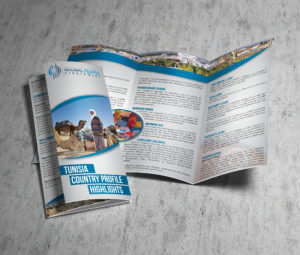