Sweden is a Scandinavian country located in Northern Europe along the Baltic Sea, bordering Norway and Finland. Formally neutral through the two world wars and the Cold War, it is part of the European Union but not the euro. The country has gently rolling lowland with mountainous terrain in the west, suitable for agriculture. The country has a small, open and competitive economy, with extremely high living standards. With a typical Nordic welfare system, it provides universal healthcare and tertiary education for all its people. Sweden also ranks highly in numerous quality of life categories such as education, protection of civil rights, equality and human development. Its economy is focused on exports with an emphasis on engineering, telecommunications, pharmaceuticals and automotive industries.

About 15% of the county lies above the Arctic Circle, with most of its total land area covered by forests. Swedish is its official language with small minorities speaking Finnish, Sami, Romani, and Yiddish. The majority of Swedes are Lutherans with a culture focused on egalitarianism and humility. 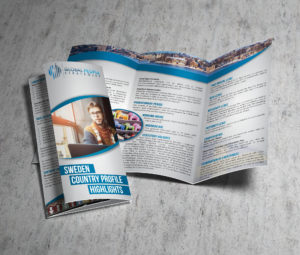