The kingdom of Spain is located on the Iberian Peninsula of Europe and is the second largest country in the European Union. Spain became the world’s first global empire during the second millennia, leaving a cultural and linguistic legacy that now comprises almost 600 million Spanish speakers around the world, making it the second most spoken language on the planet, after Mandarin Chinese.

Spain has one of the largest economies in the world and is part of the euro zone. However, it continues to suffer from weak employment rates, largely as a result of its big informal economy and a relatively poor education system in comparison to others amongst OECD nations.

Tourism is a big part of its economy, making it the second most visited country in the world. Its geographic location, attractive climate, history and vibrant culture bring in enough tourist dollars to make the industry almost 5% of the country’s total GDP.

With a population of 46 million (largely Roman Catholics), Spain has several centers of population, including its capital Madrid, as well as cities such as Barcelona, Sevilla, Valencia and Bilbao. There are distinct ethnic and linguistic identities represented within the nation, including the Basques, Catalans, Galicians and Andalucians. 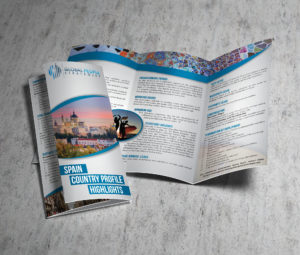