Located on the Iberian Peninsula of Europe, Portugal is a nation with a rich history of discovery and seafaring, under Prince Henry the Navigator, King John II and Vasco da Gama encouraging and engaging in global travel to new lands, establishing an empire and monopolizing trade (such as spices).

Portugal has developed into an increasingly and diversified service-based economy since becoming a part of the European Union. Resulting from a strong rebound in Portugal’s private consumption and export, the country overcame the economic slump attributed to the 2008 global financial crisis. Portugal GDP increased to 2.5% in 2017; however, the unemployment rate has remained disappointingly high.

Portugal itself has an estimated population of only 10.8 million, mostly Roman Catholics, but has left an indelible mark on culture and architecture in a world that now has over 300 million Portuguese speakers. Portuguese cuisine is diverse and influence by its former empire, including dry cod, grilled sardines and caldeirada, a potato based stew made from different types of fish. Some of the best known Portugese wines are Vinho Verde, Port, Madeira and Moscatel. 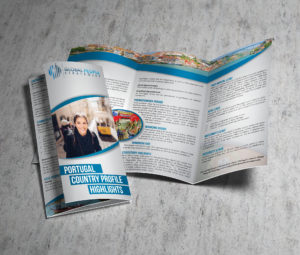