The Sultanate of Oman is an Arab and Islamic country located on the southeastern coast of the Arabian Peninsula. It shares borders with the UAE, Saudi Arabia and Yemen. Oman is an absolute monarchy and its current ruler, Sultan Qaboos bin Said al Said, is the third-longest reigning monarch in the world.

Oman is considered a high-income country which is mainly dependent on oil exports. Its petroleum reserves are the 25th largest in the world. It has one of the hottest climates in the world due to its location in the Persian Gulf with summer temperatures that can go up to 40°C (104°F). Wildlife incudes the Arabian humpback whale, a species whose endangered status is being highlighted by whale watching tourism.

Oman has over 4 million people, the majority of whom are Muslim with Christians, Hindus and Buddhists forming a minority. Its largest city is Muscat with a population of just under 800,000 people. 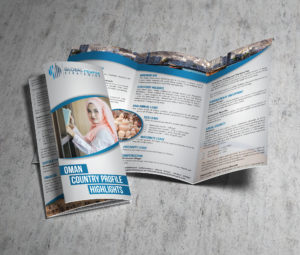