Nigeria has the largest population of all African countries. It also has one of the fastest developing economies in the world. The country has suffered government coups, a civil war, several constitutional changes, as well as military rule. Today, Nigeria has a federal republic system of government influenced by colonial English, traditional and Islamic laws. Nigeria relies largely on oil as an export, followed by agricultural and industrial raw materials and products.
Half the population of Nigeria is Muslim while the other half are Christian or Indigenous. The country’s official language is English, but other local languages such as Yoruba, Igbo, and Hausa are also used widely. Nigeria is a community-oriented country where extended family members are closely involved in an individual’s day-to-day activities. Age, seniority and social status are also very important as a way of signifying respect and honor. 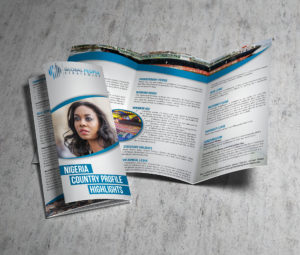