Namibia gained independence from South Africa in 1990, and is bordered also by Zambia and Angola. Its economy relies on mineral extraction and processing for export with mining accounting for 12.5% of its GDP. Namibia is among the largest global producers of uranium as well as zinc and smaller quantities of copper and gold.

With its capital in Windhoek, Namibia has a population of 2.4 million and is one of the least densely populated countries in the world. Primary languages include Oshivambo, Nama, Afrikaans, Otjiherero, Kavango, Caprivi, and English (official). Namibians are mostly Christians, with at least fifty percent practicing Lutheranism. Namibia’s focus on environmental conservation and protection of natural resources has resulted in its government’s emphasis on allocating funds towards resource management in a climate that is one of the driest in the world. 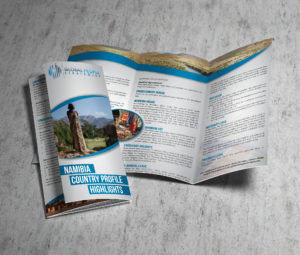