Mexico is a strip of land connecting the continents of North and South America. In the north, Mexico borders the United States, and to the south, Belize, Guatemala, and the Caribbean Sea. To the east, Mexico is bordered by the Gulf of Mexico and to the west, the Gulf of California. Mexico lies in one of the most earthquake and volcanic prone areas in the world. The country is made up of 31 states where the federal district of Mexico City is the capital.

Most Mexicans live in urban areas despite the fact that the country is among the most populous in the region. There are three classifications of ethnic groups in Mexico: the Mestizo or Amerindian-Spanish who account for over 60 percent of the population; Amerindian people who account for just over 20 percent; and white people. More than 90 percent of Mexicans speak Spanish which is the national language. Some speak the indigenous languages of Mayan and Nahuatl. The country’s social life is largely based on religious values and those of family and the community and over 80 percent of the country’s people are Catholic. 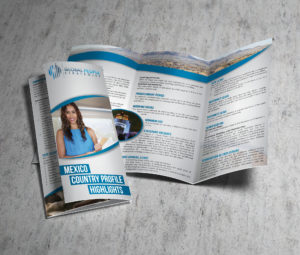