Located off the Southern Coast of Africa, Madagascar is the fourth biggest island in the world. Due to its geographic isolation, the island is famous for its distinct plants and wildlife found nowhere else on the planet. Madagascar is famous for its lemurs which have thrived in that location due to a lack of competition from other species. This varied flora and fauna faces endangerment from human development and interaction, with almost 90% of its forested area already lost to agricultural practices that are native to the inhabitants. Forestry, agriculture, and fishing are the mainstay of Madagascar economy, which accounts for over one-fourth of the nation’s GDP and for employing about 80% of the entire population. Madagascar has also experienced political instability including a coup, disputed elections, and violent unrest.

Madagascar has a population of 25 million with major ethnic groups including Malayo-Indonesian, Cotiers, Indian, French, Comoran, and Creole. Most Malagasy are multi-ethnic, reflecting the nation’s diversity. The primary languages of Madagascar include both French and Malagasy and the majority of its people are Christians, Muslim, or Indigenous religionists. 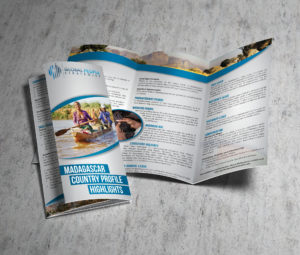