Kenya is an East African nation positioned along the Indian Ocean and surrounded by Somalia, Uganda, South Sudan, Tanzania, and Ethiopia. Kenya shares part of Lake Victoria with Uganda and Tanzania, making that area a great port of East African trade and a thriving fishing harbor. Population density in Kenya is sparse in the eastern region and dense around the central region, urban centers, coastal areas as well as the western region around Lake Victoria. The county has 42 tribes, with the largest of them being Kikuyu, Luhya, Luo, and Kalenjin. English and Kiswahili are the official languages and Christianity accounts for 83 percent of people’s practiced religion and Islam 11 percent.

GDP growth in 2016 was 5.8% and was largely driven by services and industry, rather  than by agriculture. Major economic sectors are real estate, transport, storage, construction and manufacturing. Political uncertainties from the 2017 general elections, among other issues, may have caused a decline in the most recent growth rate to 5 percent. 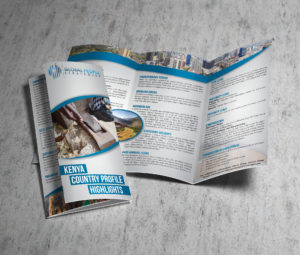