Jordan is an Arab country, on the East Bank of the Jordan River, bordered by Israel and Palestine to its west and Iraq to the its east. After the breakup of the Ottoman Empire around WWI, Jordan was established as a monarchy ruled by the Hashemite. Although viewed as a relatively stable country in a region that is beset by continual political and religious strife, Jordan still has its share of troubles, namely in the form of an influx of refugees from neighboring lands such as Palestine and Syria, fleeing persecution and scarce resources.

Jordan has a relatively small economy and is heavily dependent on imported energy particularly natural gas, which makes about 25 to 30 % of the nations’ imports. Trade and finance account for nearly one-third of its economy. Tourism is also considered to be a major source of revenue and employment for the country.

With a population of 10.2 million, Jordan’s major ethnic groups include Jordanian, Syrian, Palestinian, Egyptian, and Iraqi. Although Arabic is the official language, English is widely used amongst the middle and upper class. Jordanians are primarily Muslim. 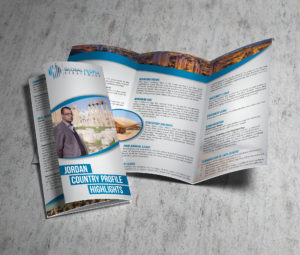