Ireland is geographically located in Western Europe, separated from Great Britain to its east by several bodies of water. Politically, it is divided into the Republic of Ireland (officially, Ireland) and Northern Ireland, which is a part of Great Britain. The Irish climate is known for being milder than one would assume for its northerly location, as a results of the Atlantic Ocean’s moderating influence, as well as abundant rain and cloud cover.

Ireland is a small nation that depends on trade for its economic growth. The Irish economy has continued to grow since 2017, largely attributable to increased job growth, strong export industry, and low inflation. However, the highest risk currently facing the Irish government is the U.K.’s planned departure from the European Union by 2019.

Ireland’s population is estimated at 5.01 million, most of whom are Roman Catholics, speaking primarily Irish and English. The Irish are known to associate their national identity with their religion. For instance, green is a color linked internationally to being Irish, and within Ireland, green is associated with being Catholic and Irish. Ireland still retains many elements of its ancient, indigenous culture as expressed through its Gaelic traditions in sports, music and language. 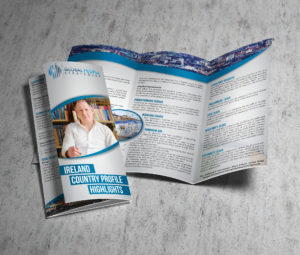