Iraq is a country in the Middle East, neighboring the Persian Gulf between Iran and Kuwait. Although known more recently as a battlefield for rival forces since the United States ousted President Saddam Hussein in the year 2003, Iraq’s history led to it being named the cradle of civilization. It is believed that the oldest human civilizations began in this region, since the 6th century B.C., including ones that led to literacy and the establishment of the rule of law for organized governance. After an extended rule under the Ottoman Empire, modern Iraq was created by Britain in the early 20th century.

Nowadays, Iraq’s economic growth relies on oil exports, which provides about 85% of the country’s revenue. As a result of its conflict-ridden recent history, Iraq continues to face various challenges such as social stability, a lack of security, an unstable political system, massive corruption, insufficient essential services, and a shortage of skilled labors.

With a population of 39.2 million, Iraq’s major ethnic groups include Arab and Kurdish, with Islam as the predominant religion, with mixed Sunni and Shia followers. 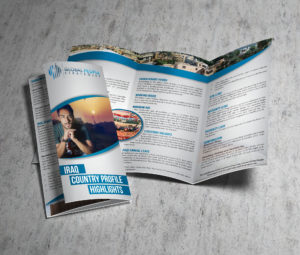