As the country with the second largest population in the world, India can be said to be the world’s largest democracy, with over 1.3 billion people and a vibrant political and journalistic environment. It is also a fast-rising economic and nuclear state that still faces enormous socioeconomic and environmental problems within its borders, including a large portion of the population under abject poverty. India has a millennia old culture and civilization that is rich in history and global impact. Hindi and English are the formal languages with 20 other languages spoken that have more than a million speakers each. Major religions include Hinduism, Islam, Christianity, Buddhism, and Sikhism.

After two centuries under British colonial rule, India was partitioned to create what are now Pakistan and Bangladesh. India is still involved in territorial disputes with Pakistan over Kashmir, amidst other internal conflicts between its Hindu and Muslim populations. With a rapidly growing economy, India increased exports by over 20 percent in 2017, created over 10 million jobs, and around 1400 new startups. 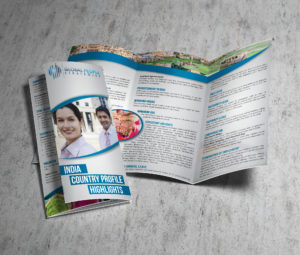