Once a central part of the Mayan civilization, modern Guatemala got its independence from Spain in 1821. It is a Central American country bordered by Mexico to its north and El Salvador to its south. Guatemala is the most populated nation in Central America with agriculture accounting for 13.5% of the GDP. The country primarily exports products like sugar, vegetables, coffee, and bananas. Unfortunately, over half their national population lives below the poverty line and about 23% live in extreme poverty.

With a population of 15.4 million, Guatemala has several ethnic groups including Mestizo and European (60%), Maya (39.3%), and non-Mestizo and Non-Maya. Spanish is the main language followed by Mayan languages. Religion in Guatemala includes Roman Catholic, Indigenous Mayan beliefs and Protestant Christianity. Guatemala is also known for its rich biodiversity and ecosystems, including several species that are endemic to the region. Resulting from political instability, lack of economic opportunities, and natural disasters, Guatemalans have a history of both legal and illegal immigration to neighboring countries. 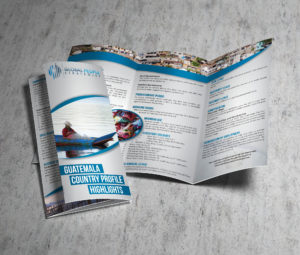