After gaining independence from the Russian Empire in 1917, Finland was a relative latecomer in switching from an agrarian economy to a more modern, industrial economy, doing so only around the 1950s. The country is geographically located in Northern Europe, bordering Sweden and Russia. The nation is now highly industrialized with a free-market economy, based on the Nordic model with an extensive welfare state and one of the highest per capita incomes in the world.  Finnish GDP was $251.88 billion in 2017, attributable primarily to the service sector, followed by manufacturing. Largest industries include electronics, machinery, vehicles and forest products. Trade with the EU makes up almost 60% of the country’s total trade.

With a population of 5.5 million, Finland was ranked first as the world’s most stable nation and second in the Global Gender Gap Report.  Finnish is the predominant language followed by Swedish and Russian. The majority of the population practice Lutheranism. The Finnish people can boast some of the world’s best statistics in education and health, along with a culture that prides itself on openness, transparency and a free press. 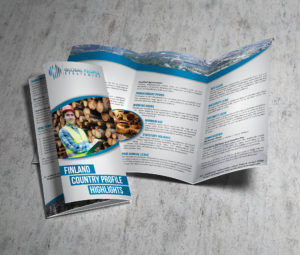