The Democratic Republic of Congo is a nation in central Africa neighboring the Republic of Congo to the east, the Central African Republic to the north, South Sudan to the northeast, Burundi, Rwanda, Uganda and Tanzania to the east and Zambia and Angola to the south. It is the second largest African country by land mass. Over 60 percent of the country is forested and has a wide range of natural resources such as minerals, agricultural capacity, hydroelectric power capacity, as well as timber.

As a poor country, DRC also has had the longest running current political conflict affecting the world today. These wars have involved 9 African armies and numerous armed gangs. Ethnic groups are mostly Bantu, with the largest being Luba, Mongo, Kongo, and the Hamitic Mangbetu-Azande. French is the official language with Lingala, Kingwana, Kikongo, and Tshiluba also widely used. 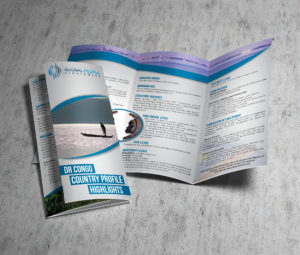