The Czech Republic is a prosperous country of 10.6 million people, located in Central Europe between Germany, Poland, Slovakia, and Austria. It has one the highest GDP growth rates and lowest unemployment rates in the European Union, in spite of a relatively high dependence on exports resulting in susceptibility to volatility in demand. Czech Republic’s GDP was $215.73 billion in 2017, mostly from automobiles exports making up almost 80% of the total.

The country’s cultural groups include Czech (64.3%), Moravian (5%), and Slovak (1.4%) with Roman Catholicism as the primary religion. The Czech people enjoy socializing in neighborhood pubs, drinking their world famous Czech beer, connecting with family and friends. January 1st, 1993 is celebrated as the day of the founding of the Czech Republic, as separate from the former country of Czechoslovakia. 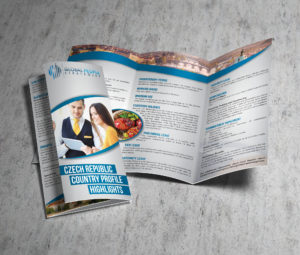