Croatia (formerly a part of Yugoslavia) is country in Southern Europe, bordering the Adriatic Sea, as well as Bosnia, Herzegovina, and Slovenia. Although relatively wealthy as an economy, a war in the 1990’s caused severe turmoil for its people as well as its development. After the war, Croatia’s economy subsequently improved as a result of increased consumer spending and tourism as well as the stability of its currency, kuna. Croatia’s government is continuing its efforts to decrease public debt, establish a Eurozone accession plan, as well as accelerate privatization in order to enhance the country’s wealth.

Croatia’s population is estimated at 4.1 million people with a GDP of $54.85 billion, and an unemployment rate estimated at 12.4% in 2017. Their official language is Croatian (95.6%) with Serbian also spoken by a minority. Religions practiced include Roman Catholicism (86.3%), Orthodox Christianity (4.4%), and Islam (1.5%). Croatians take great pride in their nation’s cultural heritage and have a strong sense of loyalty to their regional identities. 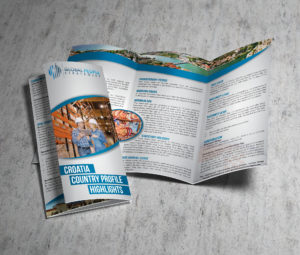