Burundi is a small, land-locked nation in Central Africa, bordering Tanzania and Rwanda. With a troubled history of ethnic conflicts, Burundi’s economy continues to suffer from an underdeveloped manufacturing industry as well as corruption, poor governance, low educational levels, as well as a high level of poverty.

With a population of about 11,466,756, Burundi’s ethnic groups include Hutu (85%) and Tutsi (14 and languages spoken include Swahili, English, and Kirundi, the official language. Kirundi is spoken by both the Hutu as well as the Tutsi. People of Burundi also practice several religions include Protestant Christianity (23.9%), Islam (2.5%), and Roman Catholicism which is the main religion with 62.1% of the population practicing. 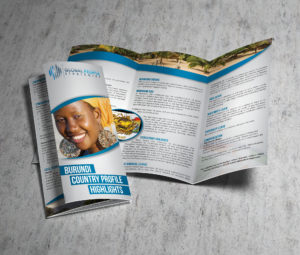