Kyrgyzstan is a land-locked nation located in Central Asia bordering Kazakhstan and China. With an ancient culture influenced over thousands of years by several great civilizations that traveled along the Silk Road, the modern country of Kyrgyzstan remains affected by tribal conflicts after its separation from the Soviet Union. The majority of the country’s 6 million people are ethnic Kyrgyz people, followed by Uzbeks and Russians.

Kyrgyzstan is landlocked and is farther from the sea than any other country. It has a mountainous terrain, with significant natural deposits of gold and other rare metals. Its economy relies on mineral extraction, agriculture, and international remittances (such as from the IMF) for economic growth. Meat, cotton, and wool are their primary agricultural products. 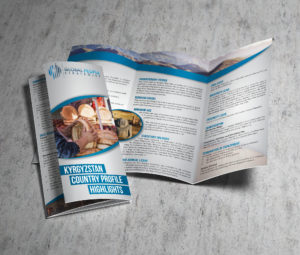