Australia is the sixth largest country in the world, while also being relatively isolated from the rest of the world (sometimes called the “island continent”). Although there are more than 200 spoken languages amongst its population, English is the most spoken language, followed by Mandarin. Having been a former colony, British culture dominates the country despite multi-ethnic migration to its shores.

The Australian economy had a GDP of A$1.69 trillion in 2017, making it the second-wealthiest country in per capita terms, after Switzerland. Its economy has faced some challenges, but the country emerged from the 2009 recession with minimal damage. Having such a strong economy has come with its own challenges, the primary being a fiscal deficit caused by the government prior to 2009 which has affected the effectiveness of subsequent governments. Despite this, Australia is highly competitive in technology, service delivery, manufacturing, and innovation and science services. The political stability, robust legal system, and bureaucracy in the country has also greatly enhanced transparency in civic life. 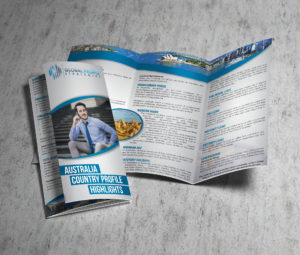